We arrived at the Bayford Meadows circuit in Kent all set to claim the under 60 seconds crown that the drivers have been working towards all summer holiday. Aimee aka “the twig “ was high spirited and as soon as the support van stopped, she was getting her race suit out of its bag and eagerly putting it on ready to sign in.

The kart was checked over by scrutineer and given the green pass sticker. Back at the van, the kart was then fueled up, Tyre pressures checked, the chain was oiled and it was time. The twig put on her balaclava, helmet, neck protector and her gloves ready to start her first test session.

The Twig sat down in her kart, mentally preparing herself for a new lap record. With the engine turned on and data logger ready to go. Her first lap read 63.57 seconds, then the next lap 61.48  seconds, afterwards a bit of traffic and then steady 61 .63 seconds. With a clean track ahead and the fastest lap done in this session, Aimee managed to get a time of 60.92 seconds at 44.1 mph.

The Twig then went to the back of the pits for a debrief, and a look at the data. Whilst looking at the data, we found that turning in late adds .3 of a second to her time, so we tested this in session 2. Session two was upon us, so Aimee prepared herself again, putting on her balaclava, helmet and gloves. This time, the twig wanted to go near the back, so we lined her up and started the engine.

The Twig raced out of the pits and down to turn 2, catching up with the others. She passed one kart then headed back towards the pits with a 180 degrees turn. Aimee attempted to pass two karts, one of the karts on the inside pushed the other kart into the twigs path – in a blink of an eye, the twigs left hand wheel hit the right rear wheel of the other kart, flipping the twig straight over and skidding to a halt. The red flag waved and the session was stopped, dad came straight over as the twig was being rescued by the marshals. Twig’s helmet was scratched and she was winded.

We were rushed to the medical room and she was checked over, apart from being a little shaken, she was okay. She desperately wanted to check the kart for any damage. This just goes to show how her safety gear had saved her from a nasty injury, her trade mark crash helmet and neck protector had done their job well. 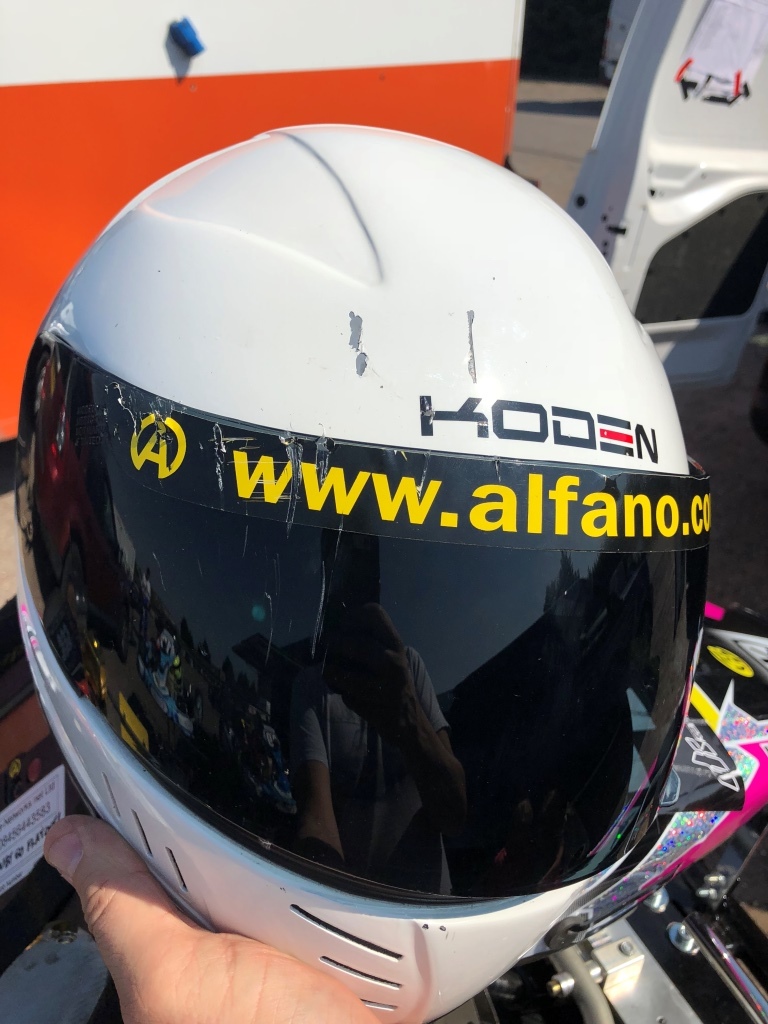 With a rapid check of the kart, we discovered the front stub axle was bent and the steering wheel had to be taped up. Although the kart looked okay when we put the chassis on the ground, the chassis was bent. 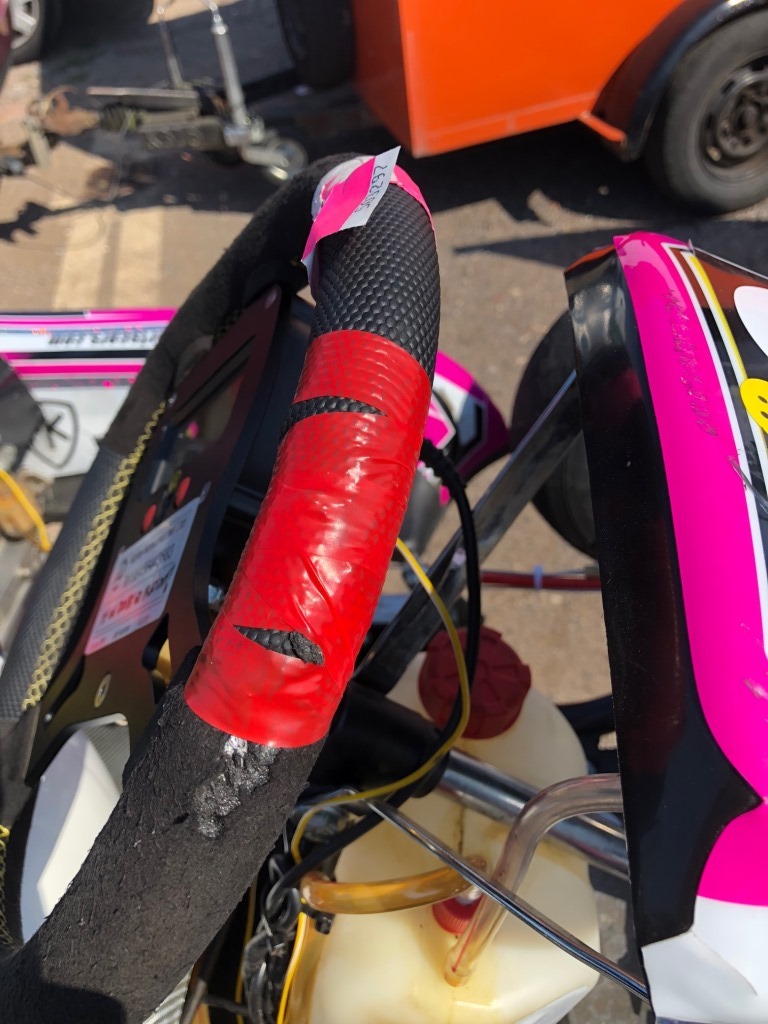 The twig wanted to go back out and, to the amazement of the other competitors, we were back out in session 3. In her first lap, she managed a time of 78.03 seconds, due to an issue with the kart. Afterwards, she managed to do a flying lap, but unfortunately never near our first session, with a time of 62.22 seconds. Aimee made her way back into the pits and was greeted by a big hug from dad; we pushed the kart back into the van. Sadly, the twig had no real gain from these sessions and the fatigue had finally set in, but the twig was presented with a “well done for going out for the rest of the day” award, which made her smile.

It was arranged for the kart to be put in the jig and tested for damage the following week, so it was off to the workshop to be taken apart before being checked. The following week, after the chassis had had the once over, we were happy to hear that the chassis was now straight, and we also had the brakes reset, also the axle ran freely without catching the pads on the disc.

Now back in the workshop and the chassis is put back together with the new upgraded pedal box.

We are now ready for our next testing day; the twig has prepared herself to break the 60 second barrier. In the meantime, it’s a few laps on the sim to keep her in hand.